This morning I went out (fabric) shopping on my bike. The shop is 6km away, and its a nice easy ride down the cycle path along the railway line. On these kind of rides, I admit I use a lone, quiet earphone and listen to podcasts as I toddle. Just loud enough so I can hear it, but am still aware of everything around me.

I'd just loaded up my bike with my haul, when a podcast started - Life Matters was having phone-in on the state of cycling in Australia. It made me think how fully I have taken up the car-free lifestyle in the last 6 months

My bike... she has no name, but gets well used!
Note chain guard and storage front and back

I don't go fast, I have a bike with a chain guard, basket and rear rack. I have eight gears, which is more than enough. My bike is heavy, but sturdy. You will never see me dressed in those horrible Lycra suits!
I am not one of those cyclists with all the mod cons. The bike I chose because I liked the look of it and the handle bars meant that my not-quite-healed-right broken elbow doesn't ache after >10km. I can fit a good amount of shopping on it, though I do need to invest in some panniers for summer so I can ditch the sweaty back-pack.

We live in the inner suburbs, and most everything is done on the bike or on foot, including my commute (26km per day) and shopping (usually a 6km round trip). We live near the station, so we do use public transport sometimes, which leaves the car as a conscious decision if we know we'll be buying bulky things (haven't quite managed the Asian skills of bike balancing!) or if its somewhere out of the ordinary.
The bike is now the norm!
I do still hate the roads but we're well served with paths in my particular part of Perth so I can mostly avoid them. I just try to act confident, keep my lines steady and be very aware of my surroundings when I'm on the roads. 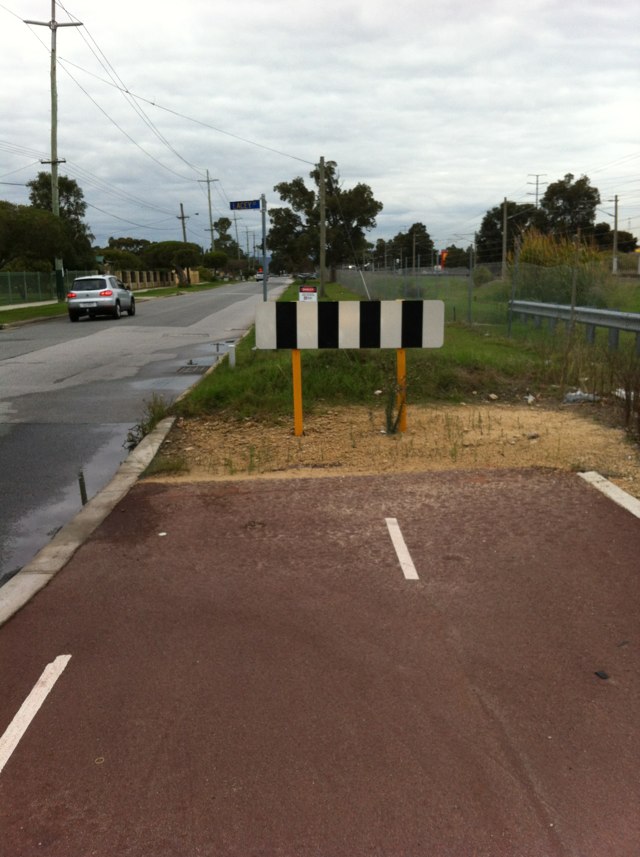 Sadly, the lovely bike path goes to within 500m of the fabric shop/major road,
then just stops!
Seriously?!?

I have some "special" bike clothes, mostly to make myself more visible for morning commutes in the dark, but usually I wear what I'm wearing anyway.

One of the things I bought at the bike shop was some fluro-pink ripstop nylon that kind of made my eyes hurt when it was laid out to cut, which I plan to use to make a high vis bib and some arm and leg cuffs to make myself a bit more visible without needing a whole other bulky outfit. The joys of working in the mining industry means I can salvage high vis stripes off my old work gear to add some night visibility too.

My commute is faster on the bike (35-40 minutes each way depending on wind direction) than rush hour traffic (at least 45 minutes) or any public transport (50 minutes), so "not having time" is a really rubbish excise as far as I'm concerned!
I can use the shower facilities at the uni gym for free, though its a bit of  a detour. My heart rate is generally around 135 bpm, so its pretty gentle, but I still burn around 600 calories a day. and it gives me a good hour of light exercise at least 5 days a week.


What I love the most is being re-overtaken by the "I'm a real cyclist"s who have all the gear but are still going slower than me, realise they've just been overtaken by a two-wheeled horse so burn off out of embarrassment! SO much fun :D


And above all, I enjoy it! I never really liked cycling as an "exercise"; I would much rather run. But as a means of transport its great. Even in the rain!