Its the Queens Diamond Jubilee weekend, and while I may be "Australian" I'm still born and bred British. I'm neither for or against the royal family, but I do think that events such as this weekend are good for national moral. Wether we can afford it is maybe another question...

We didn't do anything to celebrate, though I am writing this post while watching the coverage of the Thames Pageant on UKTV...

But... I was in Spotlight yesterday, and I accidentally bought some fabric. I know, I know... But my stash is relatively small, and Spotlight had 30% off all their fabric, and they had some nice fabrics in their clearance section. I actually went in for some baby-boy fabric to make up some items for a friends baby shower in a couple of weeks. In the end I managed to get around 11m of fabric for $40, which I'm pretty happy with!

The other fabrics are another story... but when I was deciding what to get, I spied this fabulous fabric: 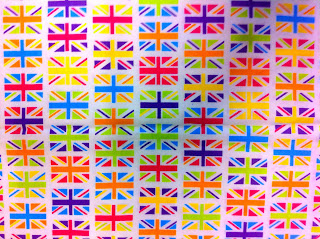 (Picture from the Spotlight buyers team)

Who could say no!
(Erm... didn't I just say I was only going to buy wearable fabrics that made me look liek I know what I am talking about? Me? Erm...)

We had a BBQ to go to that afternoon... not for the jubilee, just because, but hosted by one of my bestest buddies who also happens to be a POM.
So I snapped up a meter ($6!) and planned my sorbetto on the way home.
We were only slightly late to the BBQ, and I had a fabulous new top to show off!

The front keeps the sorbetto pleat, but I made the neckline angular to match the flags. I faced the openings, because I didn't have any suitable binding, and was too short on time to make some! The steps could have done with interfacing to stabilise them, but again, time was against me.

On the back, I deepened and squared off the neck line, and added a bit of a frill, playing with the print direction. (Though next time I would make it shorter)
I also added 3 lines of shiring at the top of the frill to aid in fitting (its not a drapy poplin, especially since I was too impatient to wash it first)
(All on top of my usual grading of the pattern in at the chest and out at the hips, and adding about 6cm to the length)

We may not be having a street party, or be drinking pimms or tea, but at least I  have been flying the flag this weekend!
at 9:11 PM