A new toy and a new challenge

I've been telling the Boy for a while that I wanted to get an overlocker/serger to add to my collection. It was on the list of baby necessities ;) Seam finishing can be awkward enough, never mind on teeny tiny baby clothes that will (hopefully) be put through their paces in terms of washing and wearing. And I hate sewing stretchy fabric on my machine. It just never seems to work for me! 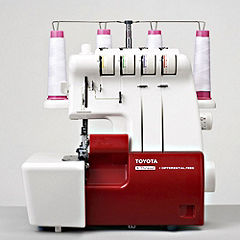 So when I saw this Toyota overlocker (SLR4D) on sale for half price at Spotlight last week, I knew it would be mine. Toyota arent exactly the brand that come to mind when you think of sewing machine creators, but I've had my sexy black Toyota sewing machine for a couple of years now, and its a dream to sew with, so off we went!

It took a few plays to get the hang of it, and its still a bit (hugely) scary that it has the potential to cut a big hole in what ever I'm working on, but I'm in love. I've used it to finish off seams on a few prototype baby garments, and sew another little onsie, but my first big adventure was with my first attempt at a maternity top. Sewing to fit a rapidly expanding stomach... Whole new challenge.

I roughly followed the tutorial by Zoe on how to transform a t-shirt pattern into a maternity top, using the Burda Sadie as my base (I some how stashed this one away for free a few years ago, but had never actually tried it).

Here is what the pattern looked like after I'd hacked it up, adding extra length between the "extend here" lines and the waist:

Can you guess which one is the front?! And then I made it up, folding the excess fabric into 4 pleats on each side.
Then I decided it was time to have a play with what else the overlocker could do, so I switched to 3 needle mode and finished off the bottom hem in as a lettuce hem, or what ever its actually called. Stretched out and encased. Then I did the arms and neck to match, since it was just a muslin and since I've still not really mastered the technique for adding neck bands. The arms stretched out more than expected in the process, so I took about an inch off under each arm to fit them again, and we were done.
The whole thing took maybe 2 hours, from printing out the pattern to putting it on.

Its still got quite a lots of growing room in it, which is lucky since my baby bump is still very small!
I'm calling it a win and sorting through the relatively large stash of stretch fabric that I've picked up on sale or from the OpShop over the last few years and getting some variations planned out so I'll be prepared once it finally stops raining and starts to warm up!